Oh yes, she would! (Run a competition, that is)

Boy #1 can be quite shy. Not with his friends and direct family, but put him into a new situation, meeting new people, and he will take around an hour to warm up and get into the swing of things. Whilst that long and painful hour is ticking past he prefers to skulk around the edges of a gathering, pulling on my or Husband's hand and coat-tails, refusing to tell interested parties anything other than his name, rank and serial number, before ultimately disappearing to wherever the 6 year old action is and then having such a good time that he never wants to go home when we call 'time'.

I can't think where he gets it from.

Except, of course, I can. My shyness was ten times worse at his age; my parents used to despair of me, I know. And because I went through this I also know that he will grow out of it - as I did. Somewhere around the age of seven, a sea-change occurred, and having been the little girl who hung back and didn't like to be noticed I became - not quite a monster - but certainly someone who wasn't shy about pushing myself forward.

I think a large part of that can be put down to my sister's and my fascination with plays; specifically, with making up our own and performing them for our parents. At the time we lived in a house with recessed window seats in a couple of rooms, and my long suffering mum was repeatedly led to one or other of those before having the curtains drawn in front of her nose prior to being subjected to our latest offering.

Then, following excited whispers and much rustling about, the curtains would be pulled back, and hey presto, the play would begin!

In true home-made pantomime style they featured prolonged pauses whilst lines were forgotten, changed or made up; splendid costumes cobbled together from whatever we could find in the dressing up box (an old nightie in a gorgeous blue green, a gold sash, and a black felt hat once worn by my mother to weddings were particularly fought over, I seem to remember); and occasionally the odd stunt or two where soft toys and dolls etc were 'invisibly' pulled across the carpet using parcel string. Our masterpieces even included music from time to time when my sister or I murdered our violins in the name of art.

And whilst I heartily applaud (geddit?) the amateur efforts made all those years ago by sis and I, I must say we would have been delighted with a bit of help in putting together a few minor details along the way. You know, ideas for plot, stunts, props, and costumes...

Which is why, when I was given the chance to feature this site and an accompanying competition, I jumped at it. Put On A Panto is a FREE site sponsored by Robinsons which takes kids through the steps of putting on their very own pantomime, from planning, to practising, to performing (it even includes invitations, posters and suggestions on making costumes). The idea is that it is a fun, creative activity for youngsters, and gives parents a little break while they prepare for the holidays.

Plus, it even features the chance to enter a competiton to win tickets to your local pantomime up to the value of £250. Altogether now: oh no it doesn't! Oh yes, it does!! (Sorry - couldn't resist).

Entering the competition is simple;

1. Simply take or dig out a photo of your favourite panto costume (for example one that the kids have worn or have designed especially for this, or some random photo from your archives featuring, maybe, a turquoise nightgown, a gold sash and a black felt hat circa 1978).

2. E-mail the photo before 11th December 2009 to amodernmother (at) gmail (dot) com with PUT ON A PANTO in the subject line.

The winner will be selected by a third party before 14th December 2009, and the winning entry gets tickets for 2 adults and 3 children to a 2009 local pantomime (or equivalent) worth up to £250. 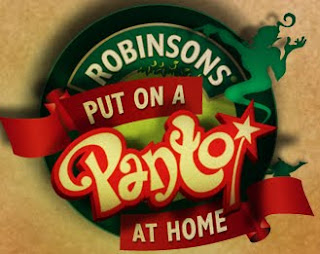 This competition is also being held at: A Modern Mother, Violet Posy, Bringing Up Charlie and Jo Beaufoix.

1. This Competition is open to all residents in the UK and ROI over 18 years of age, excluding employees of Robinsons and its affiliates or agents, the families of such employees and any other person connected with this promotion.
2. The Promoter will not be liable for applications not received, incomplete, or delayed. Last date for receipt of entries is 11th December 2009.
3. To enter, please leave a comment at this blog and then email a photograph of your favourite panto costume or a drawing of a panto costume to amodernmother (at) gmail (dot) com, including PUT ON A PANTO in the subject line.
4. All entries received by this date will be entered into a prize draw and judged by a third party.The winning entry will receive tickets for up to two adults and three children to a local pantomime (or equivalent entertainment) up to £250.
5. There will be no runners up prizes. The prizes are as stated and cannot be transferred, sold or exchanged. There is no cash alternative. No bulk or third party entries accepted.
6. The winner will be notified in writing by 14th December 2009.
7. The Promoter reserves the right to substitute the prize with a prize of equal or greater value in the event of unavailability due to circumstances beyond the Promoter’s control.
8. By entering this competition, entrants agree to be bound by the rules and by any other requirements set out in the promotional material.
9. PROMOTER: Robinsons
Posted by Potty Mummy at Tuesday, November 10, 2009

Email ThisBlogThis!Share to TwitterShare to FacebookShare to Pinterest
Labels: competition, Put on a Panto, Robinsons