Even on a winter's day, with no leaves on the trees, I was surrounded by colour when I went out skiing on this beautiful Moscow morning... 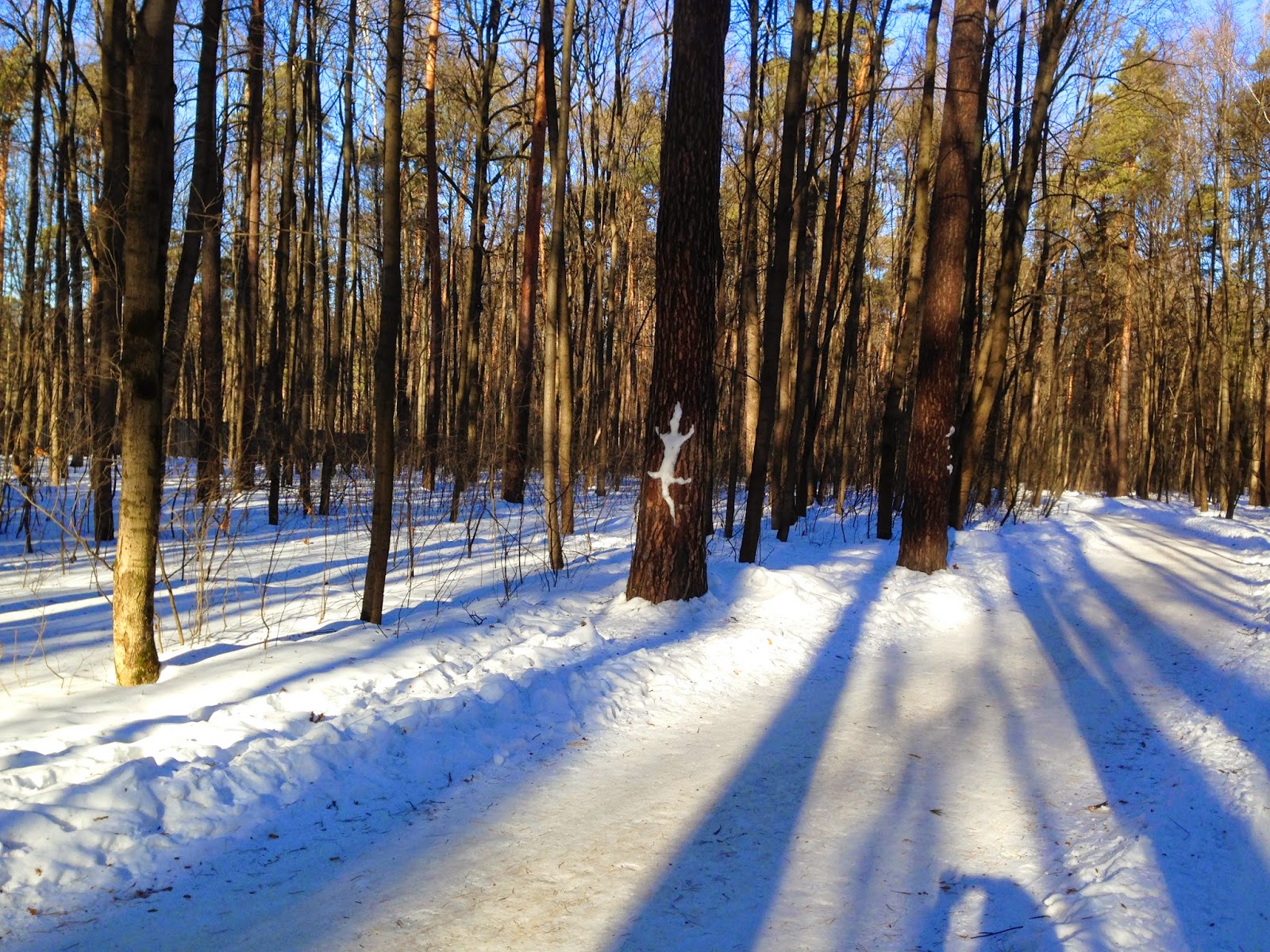 This post is part of The Gallery over at Tara's Sticky Fingers blog.

Email ThisBlogThis!Share to TwitterShare to FacebookShare to Pinterest
Labels: Living in Moscow, living in Russia, Moscow in winter, Snow, The Gallery

The prompt for this week's Gallery over at Tara's Sticky Fingers blog?  'Cold'.

Living in Moscow, I do have some experience on this subject.  When we arrived here in January 2010 the city experienced it's coldest spell for 10 years or more; within a week the temperature dropped to below -20degC and stayed there for some weeks.  (I would like to point out that at this stage we had no car, and I was walking the kids to school.  It wasn't far - about 15 minutes with a 6 year old trudging across the ice and a 4 year old being towed on sledge - but thank god the school had a cafeteria where Boy #2 and I could warm up before repeating the journey in reverse...)

But I wouldn't want you to get the wrong idea; we actually love the Russian winters.  As long as you're dressed for it, they can be wonderful.  The sky is - usually - clear, the sun is shining, there are tiny particles of ice floating through the air as if you're surrounded by glitter. You can cross country ski, skate, build snow men (as long as it's not too cold - if the snow is too dry it just doesn't stick together, and that happens around -10degC and lower) and there's no shame after you've done all that in huddling up with hot chocolate, pizza and a movie.

The only problem with this week's Gallery is that I have too many pictures to show you, so bearing in mind I have no doubt there will be lots of gorgeous images on show I've not focused on 'beauty', but more on illustrating what 'cold' actually means...

Our indoor weather station on February 13th 2012.  It HAS been colder here - but this was the only time I thought of taking a photograph. 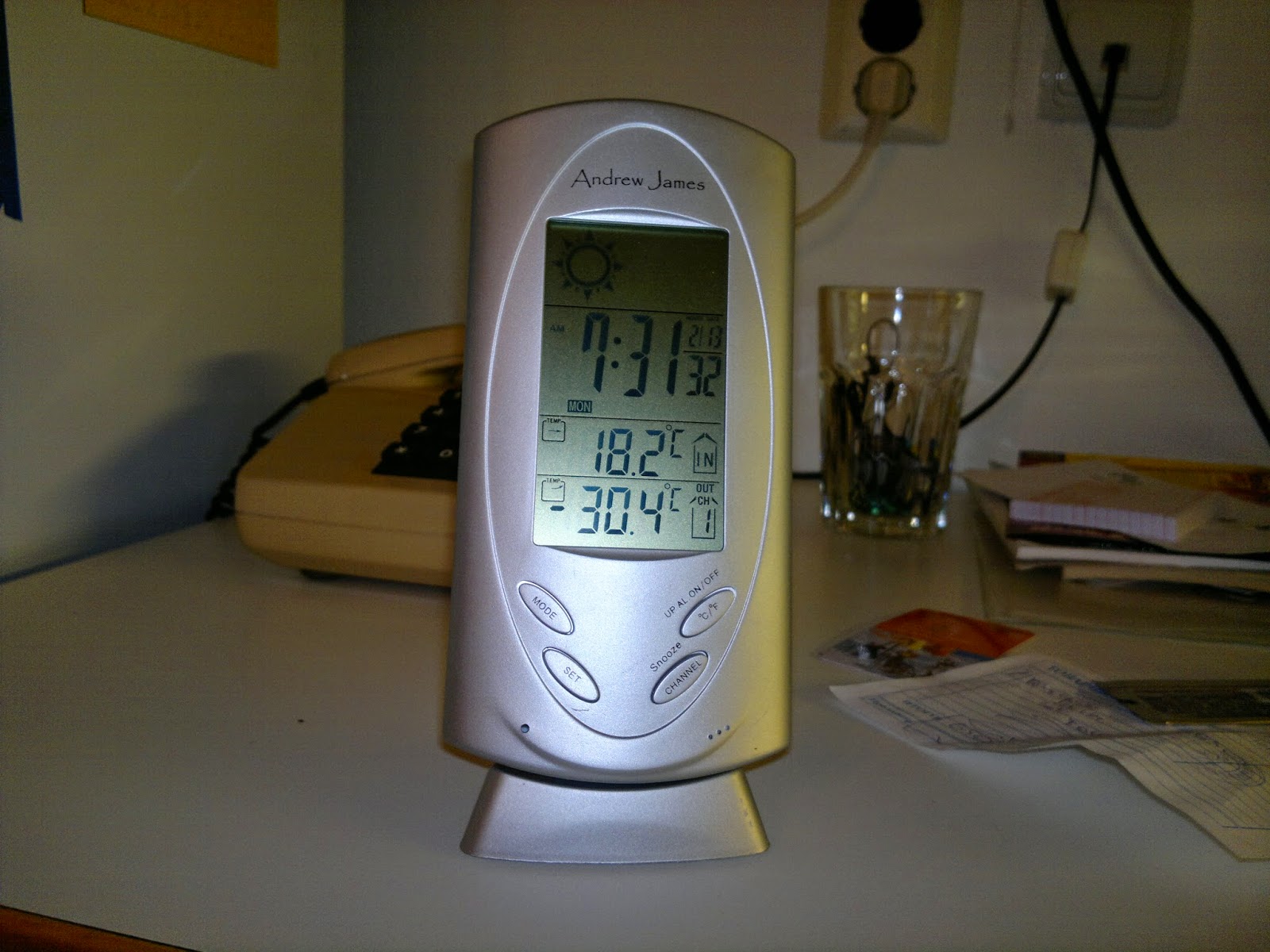 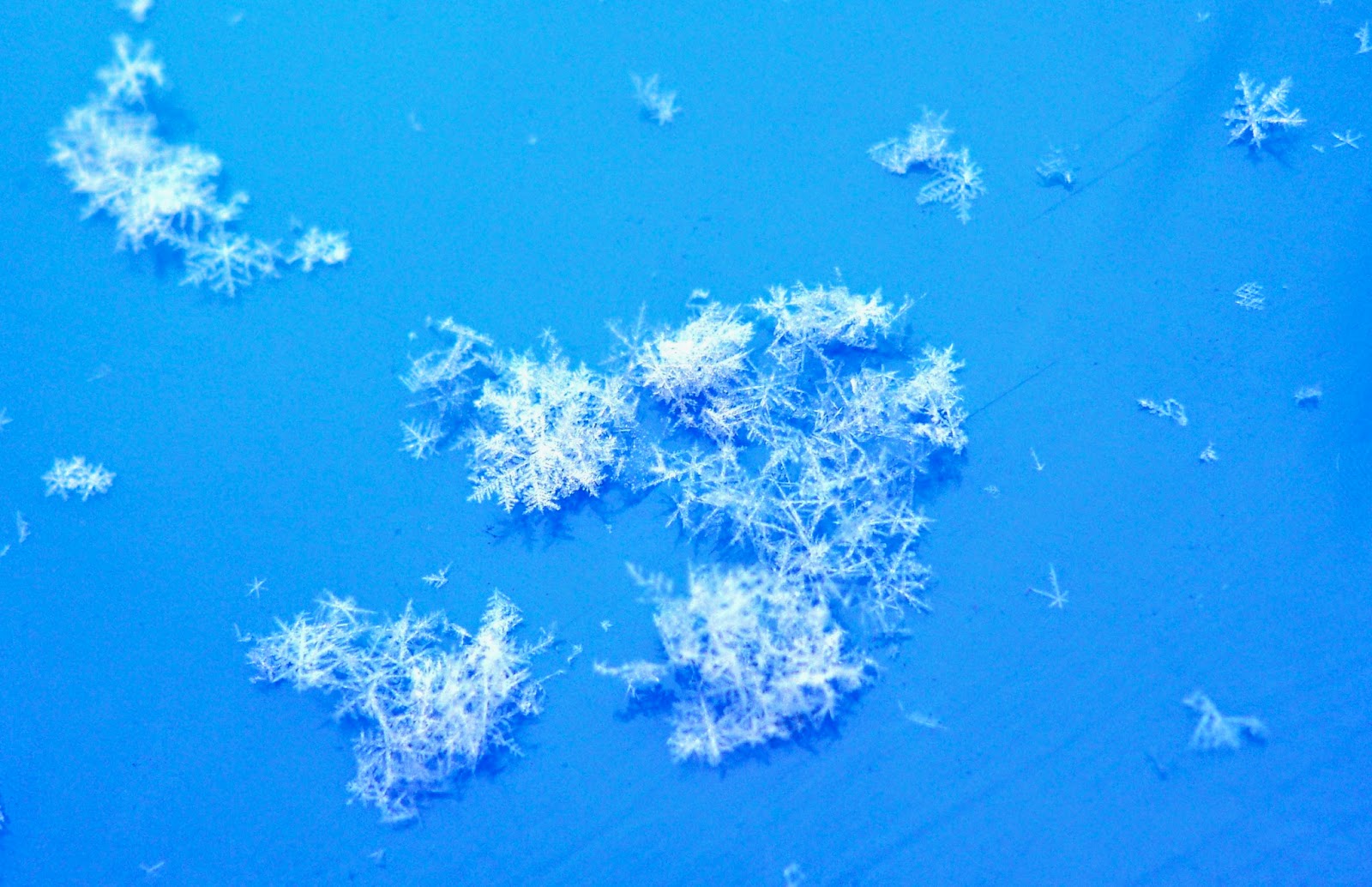 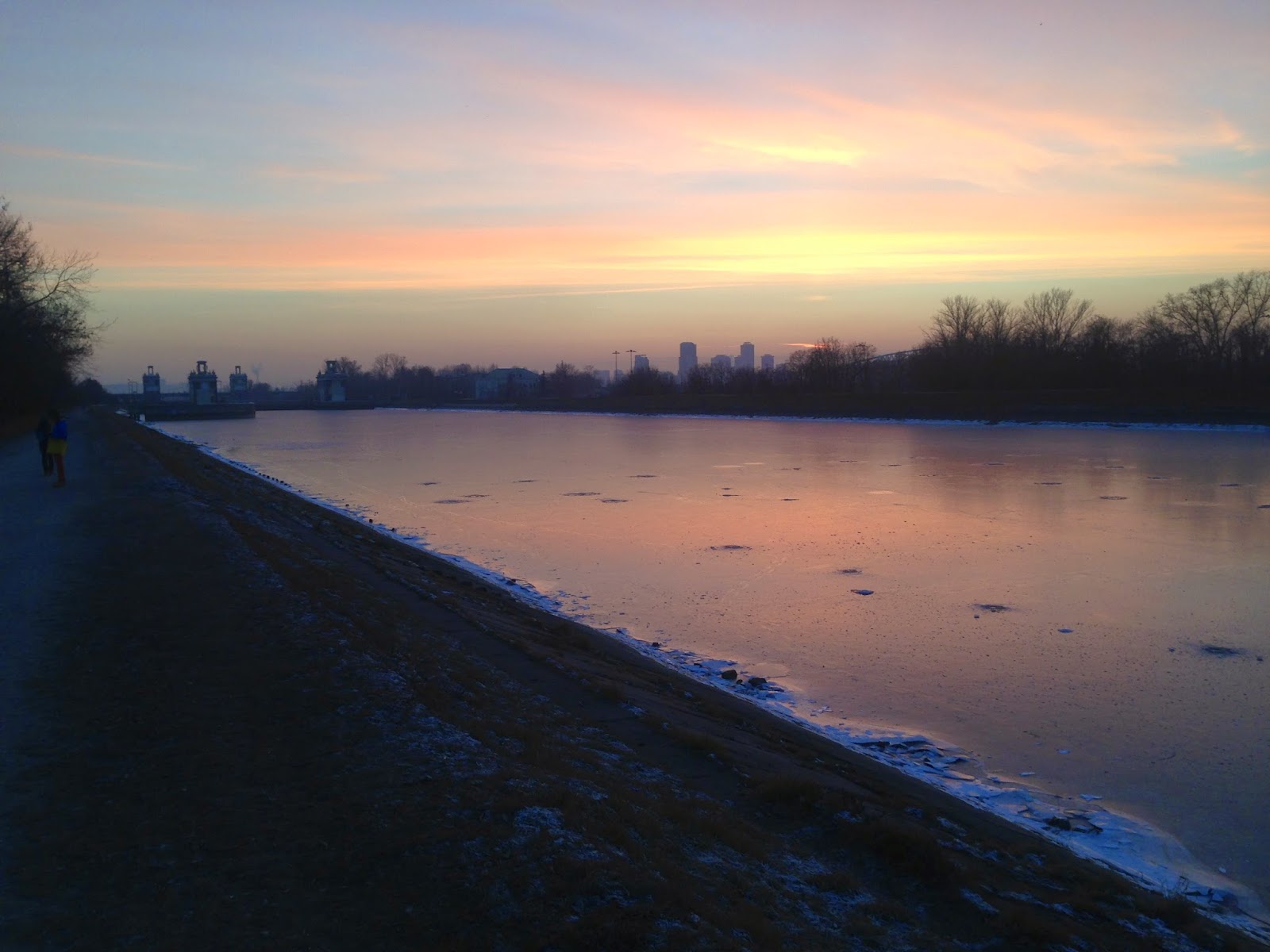 Email ThisBlogThis!Share to TwitterShare to FacebookShare to Pinterest
Labels: living in Moscow in the winter, living in Russia, The Gallery, winter

Please come and visit us in Moscow - but leave the kids at home...

My long-term bloggy friend Jennifer Howze over at Jenography has just contributed to a Yahoo piece called 'The Worst Vacation Spots on the Planet for Kids'.  Jen's contribution was to suggest that there are certain beach resorts in Europe which are best avoided at the wrong time of year, with which I would whole-heartedly agree.  She mentioned Magaluf in Majorca and Blackpool in the UK.  I would  throw Bodrum in Turkey in July and August into the mix (too hot, too busy, too noisy and just too... much) and I'm sure you could come up with your own ideas on this one.

But I would also like to say that bringing young children to Moscow for a short city-break of less than 5 days is a really bad idea.

We love having visitors.  We don't get enough of them, to be honest; for some reason (I can't imagine why) Moscow is not high on most people's bucket list.  As a family of enthusiastic expat residents we do our best to counter the bad press when we talk to friends and family about where we live, citing the beauty of the city, the excitement of being in a culture so different, and the incredible number of museums and galleries with, quite frankly, astonishing works of art that are so accessible you could - if you didn't want to set off the alarms - touch them.

But Moscow is not necessarily for young children.  I say this as someone who, like most of the contributors to the Yahoo piece, never let having infants in tow slow me down; our kids had travelled extensively at a young age and whilst it took organisation and planning, it was always rewarding to have them along.

And we live in Moscow, you might say.  And have done since our youngest son was only just 4 years old.  How can we suggest under those circumstances that it's not a good idea to bring your kids here whilst ours merrily lark around in Gorky Park?

Here's why:  the children who live here are used to it.  The sensations of this city wash over them like so much white noise but to kids who visit here for only a few days, Moscow is big, noisy, and intimidating; it's an assault on the senses.  The traffic can be crazy, and whilst the metro is wonderful and a thing of beauty it can be loud and overwhelming, especially when seen from a child's height.  The buildings, whilst spectacular, are often built on a gargantuan scale to impress and intimidate (it's a Soviet / czarist thing) as is, now I come to think of it, the city as a whole.  Moscow itself is enormous, draped with 6 lane highways through the equivalent of Knightsbridge, and it can take a very long time to get from one place to another.  The street signs are usually in cyrillic, and the wonderful museums and galleries rarely have more than a sheet of A4 in English to explain the exhibits.

And whilst we're talking about the museums and galleries, there's almost too much to see.  Adults can be forgiven for wanting to pack as much as possible into a 3 day visit to the city, but don't forget that for many children the experience can just be too intense.  Cramming a day with a trip to the Kremlin Museum followed by a quick visit to St Basil's Cathedral followed by a pit-stop in GUM and then rounding it off with an afternoon at the Pushkin Gallery might not sound like an exhausting schedule to you or I, but to a 7 year old with jet lag, it's a car crash.  Because that jet lag is an insidious thing here: Moscow is only 3 hours ahead of the UK, which may not sound like a lot but let me tell you, those 3 hours are more than enough to throw most children completely off-balance, stop them sleeping until it's just about time for them to climb on the flight back home and to generally make life very difficult for parents and other siblings, and interfere substantially with everyone's enjoyment of the trip.

So, whilst I would absolutely recommend a visit to Moscow to any adult who is even mildly adventurous, please believe me when I say that as a destination for a family trip, it works better once your kids are just that little bit older.  And, more to the point, when they can remember it better and be suitably grateful when they realise the bragging rights that their visit to Russia, organised by the Bank of Mum and Dad, gives them as they move on through life...