This post is for Wk 231 of Tara's Photo Gallery over at Sticky Fingers (click here to see the other entries).  The prompt this week is 'Landscape'.

At the beginning of last year, we were lucky enough to visit New Zealand; what a magnificent place.

I've been fortunate in my life and have travelled through all sorts of interesting landscapes, but I have to say that New Zealand currently holds top billing for me - and here are a couple of examples why... 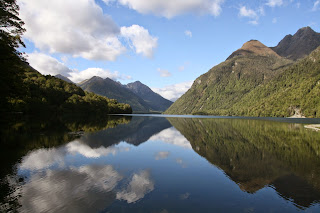 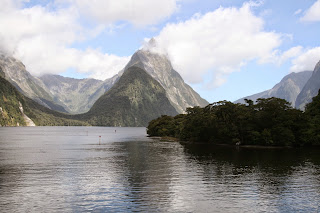 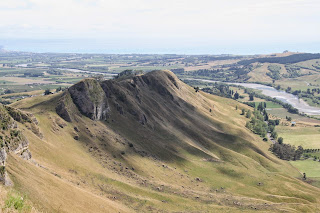 The mountains behind Kaikoura, South Island 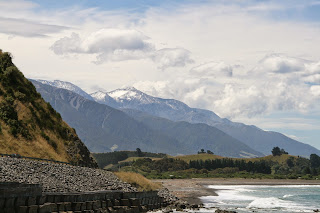 A geyser pool at Rotorua, North Island (and no - those are not my children swimming in it...) 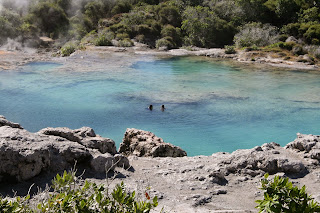 I could go on, but I think you may have got the picture by now...

This post is for Week 230 of The Photo Gallery over at Sticky Fingers blog (click here to see the other photos participating).  This week's theme is Animals...

You might have noticed that we're leaving Russia - for the foreseeable future - in the next few months.  Moscow is, of course, putting on a spectacular show for us now that we've decided to up sticks; the weather is warm, the trees are all in blossom, and we are surrounded in our suburban neighbourhood by the type of greenness that you normally only find when you stick a filter on your camera.  The city is not making it easy to leave it whole-hearted.

However, instead of showing you photos of birds and ducks frolicking in springtime I thought that I would - for once - play to the gallery (ha!  See what I did there?), and have trawled through my files to show you some photos I've taken of animals in the Moscow winter.


This was taken from our dining room window one March.  It's a Waxwing, by the way.  Don't you love his Elvis quiff? 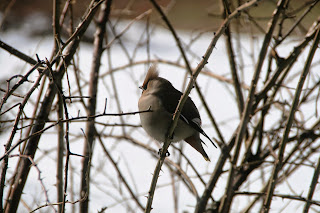 This was taken on the walk to pick the Boys up from school in February - the tuftiest-eared squirrel I ever saw. 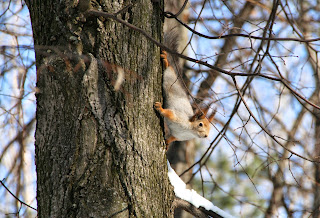 And this was also taken in February, on the canal behind the Boy's school.  You can see the hole the fish were caught in, on the bottom right. 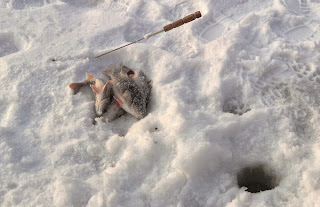 In preparation for our impending move back to the UK, I am slowly forcing myself to go through all the cupboards so that we only take with us what we actually want and need when we arrive.

This follows what I can only describe as our rather chaotic exit from the UK over 5 years earlier, when I wrote this post following the foolishness of having left Husband in charge of the packers whilst I ferried the Boys from one set of grandparents to another whilst we moved out of our London flat.  My favourite excerpt from that post is this:

'2.  Packing enough bed linen for 4 double beds and 2 singles - twice over - is a somewhat pointless exercise when you are currently living in what is basically a 2 bedroom cottage.
3. Likewise towels. What were you expecting PM, to be training as the local midwife?'

So this time around, I'm trying to be ruthless.  It's tricky.  I'm not good at throwing stuff away.  I mean, who knows, we might need that weird shaped  metal... thingy when we get back to England.  Or the broken Dyson hand-held vacuum.  There will always be a use for that, surely? Tell you what; let's just charge it up and see if there's been some terrible mistake and it does actually work?  (It doesn't).  Or that collection of instructions on how to put together the ikea shelving units that we plan to donate to charity before we leave here - surely they might come in handy?

You can see what I'm up against.

But I'm trying my best, which is why this morning I went through the Boys' clothes for the third time in 3 months and still managed to find 2 large bagfuls that no longer fit them and which I probably could have got rid of last time but which for some unaccountable reason, I missed.  Probably because I was too busy cooing over the clothes that I REALLY can't bring myself to get rid of and which I have stored in a special hamper to take back to England and pull out in 5 years time to marvel at. What's in the hamper?

Well.  I was hoping you would ask that (if only so I could write it down here to remind myself of the reasons why I kept this motley collection)...

What items of your children's clothing can't you bring yourself to part with?

Email ThisBlogThis!Share to TwitterShare to FacebookShare to Pinterest
Labels: being a mum, Boys #1 and #2, leaving Russia, Moving, moving home

The Photo Gallery 229: One Day in May

This post is for Week 229 of Tara Cain's Photo Gallery over at the Sticky Fingers blog.  Today's title is 'One Day in May'.

If you have any association with Russia you will know that May is all about Victory Day.  This year, since it's the 70 year anniversary of the end of World War II (or, as it's known here, The Great Patriotic War), the authorities are pulling out all the stops.  The main roads into town are flanked by flags, all municipal vehicles are sporting them, and right-thinking patriotic citizens have their cars and/or collars adorned by black and orange ribbons.

(More of why on my next post.  I originally put the explanations in here but it overwhelmed the photos, so decided my thoughts on this celebration deserve their own airing...)

In the meantime, here some photos of what Moscow has looked like / will look like on Saturday, pulled from my files and which I've taken over the last 5 years here. 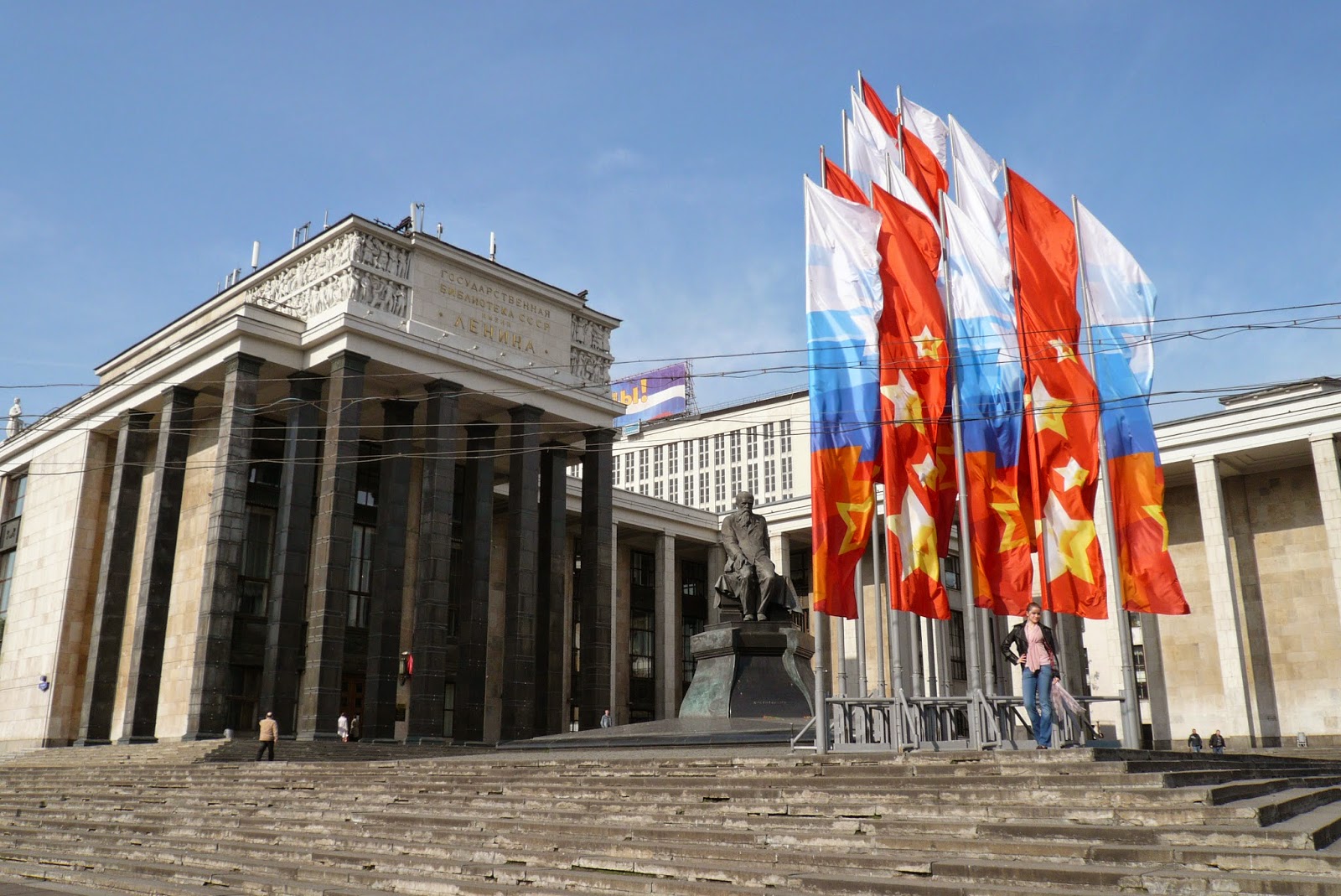 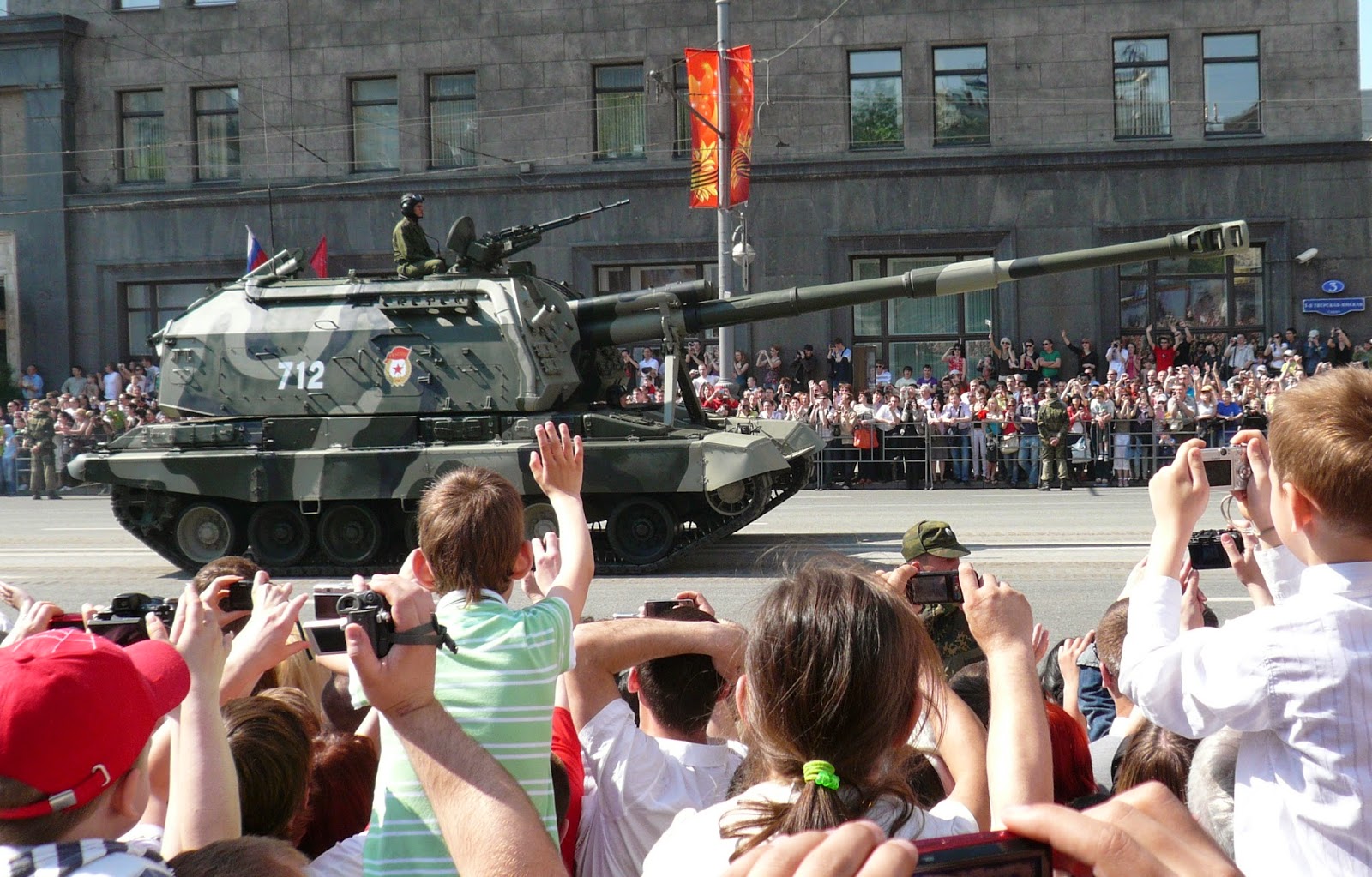 2012 - the year I discovered the superjet graveyard just down the road (now replaced by a shopping centre.  I preferred it before, frankly). 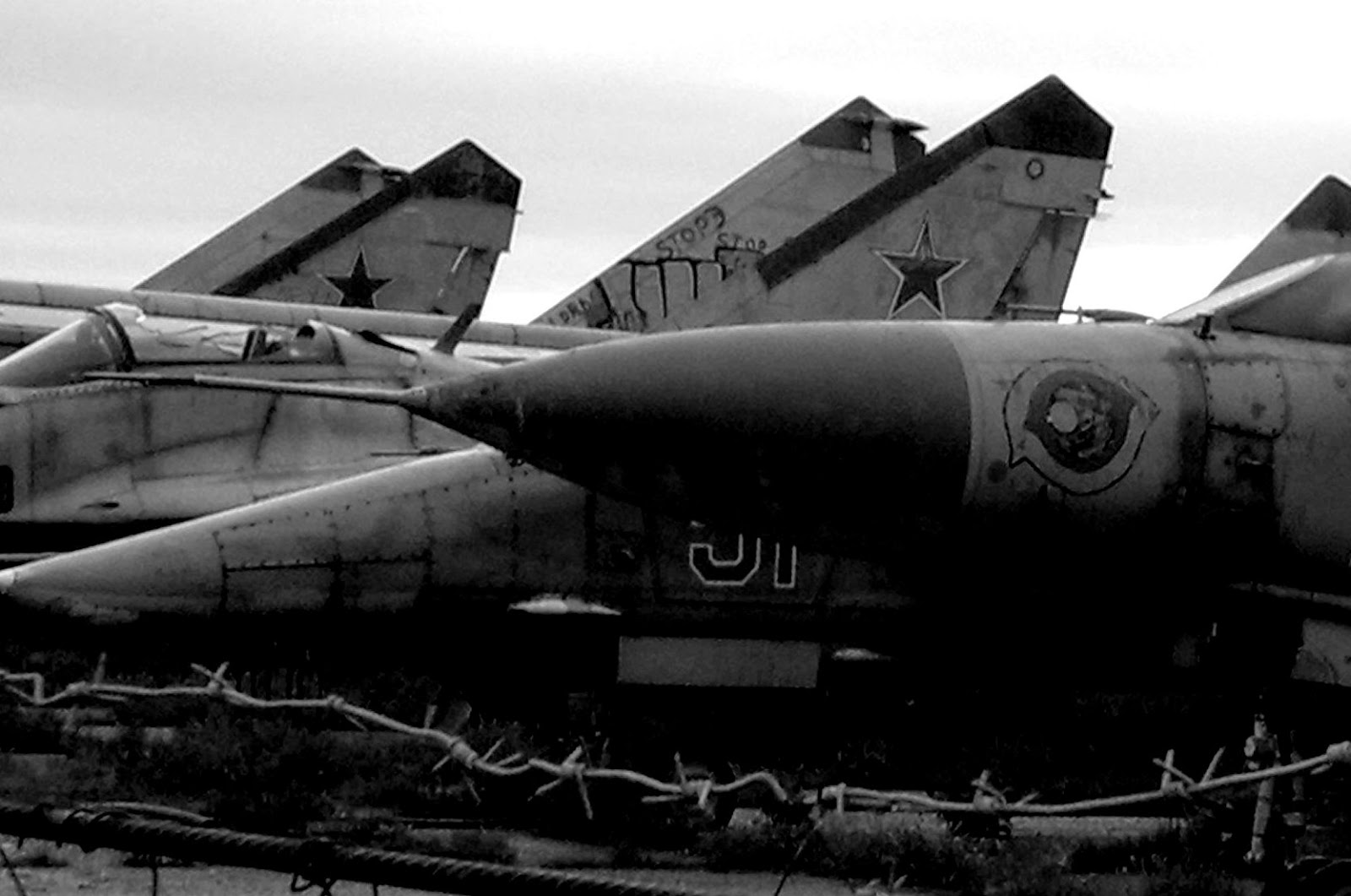 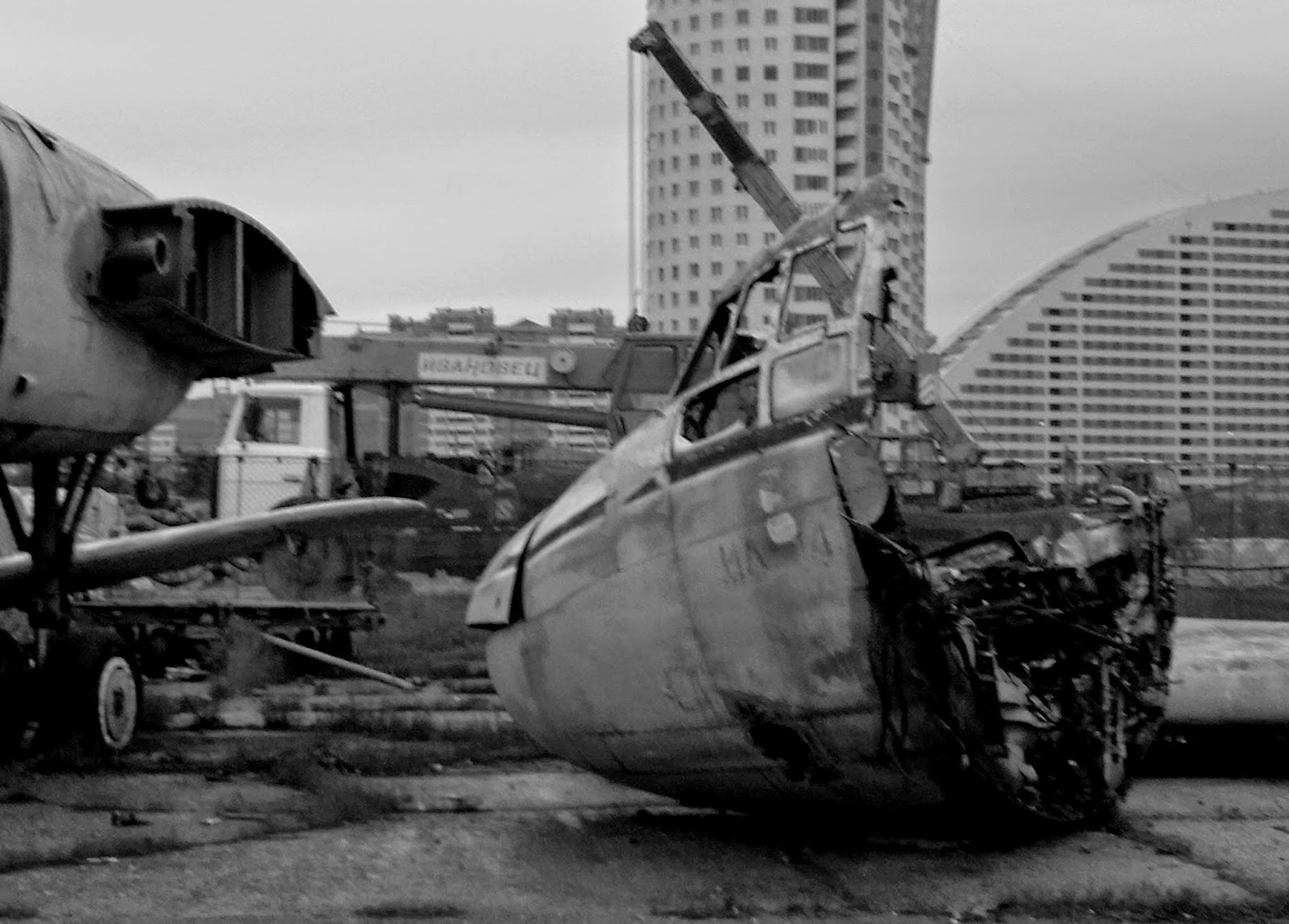 2013 -  we couldn't go to the celebrations, so petrol-head Boy #2 was forced to watch the planes from the back lot. 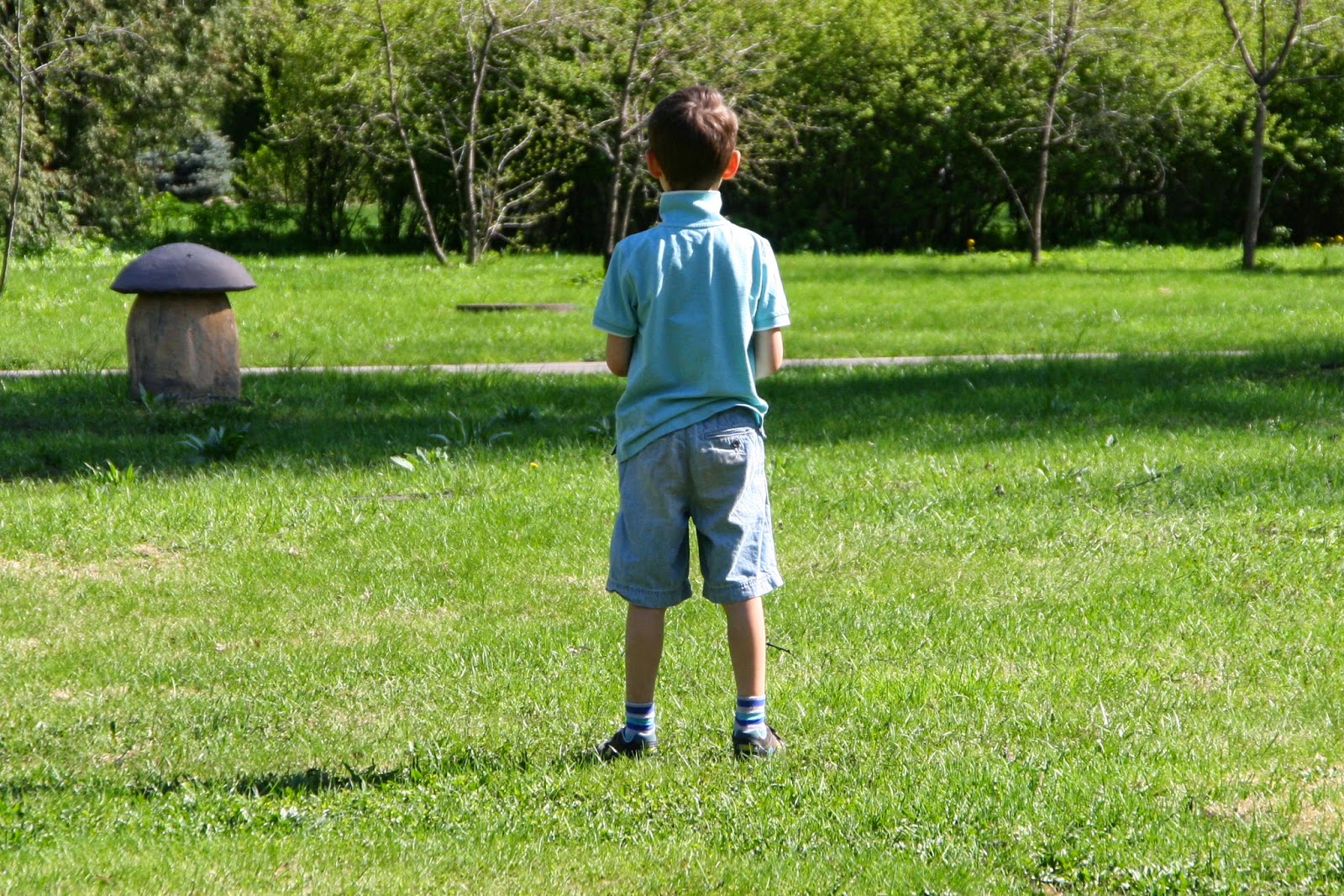 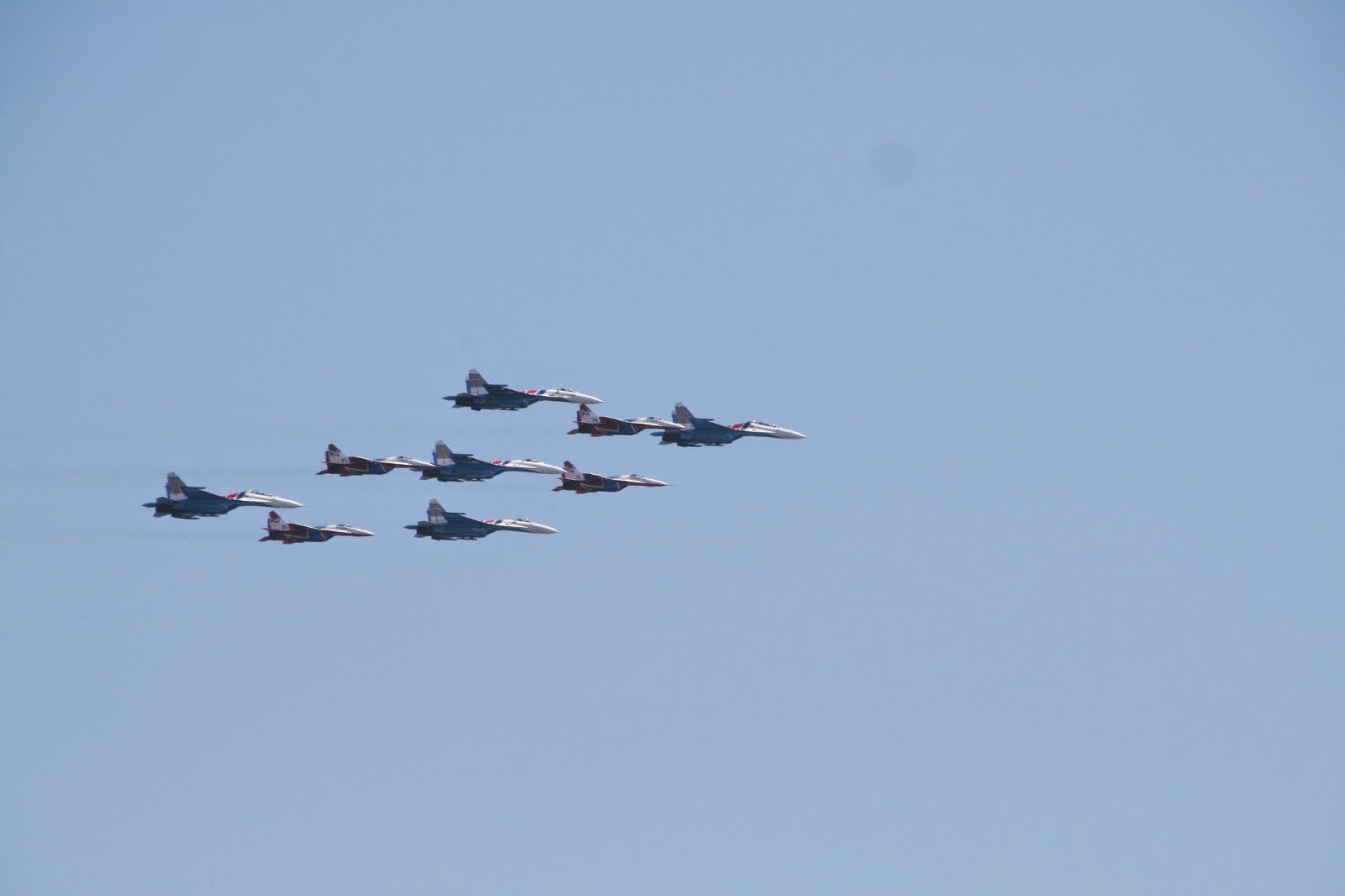 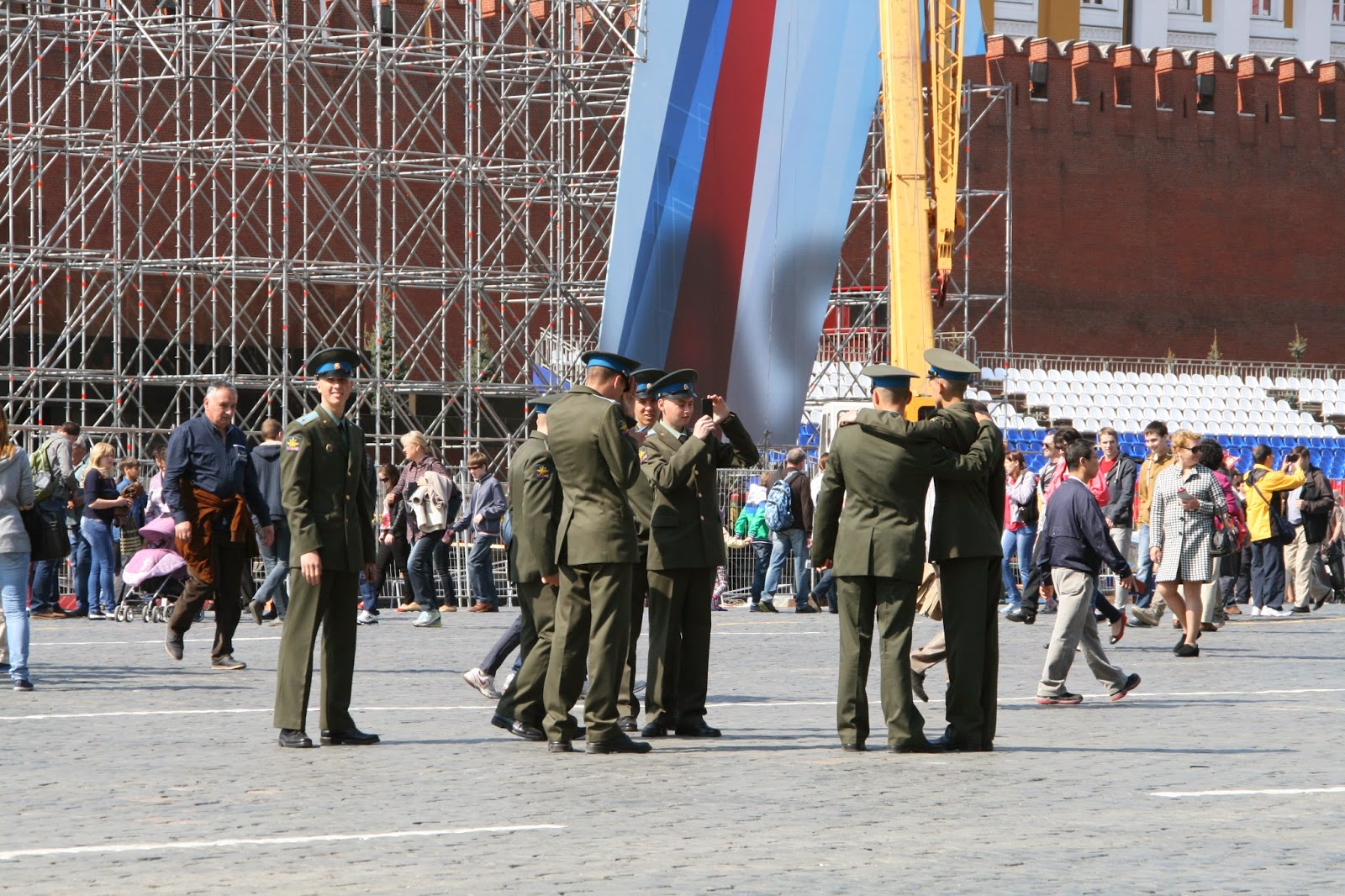 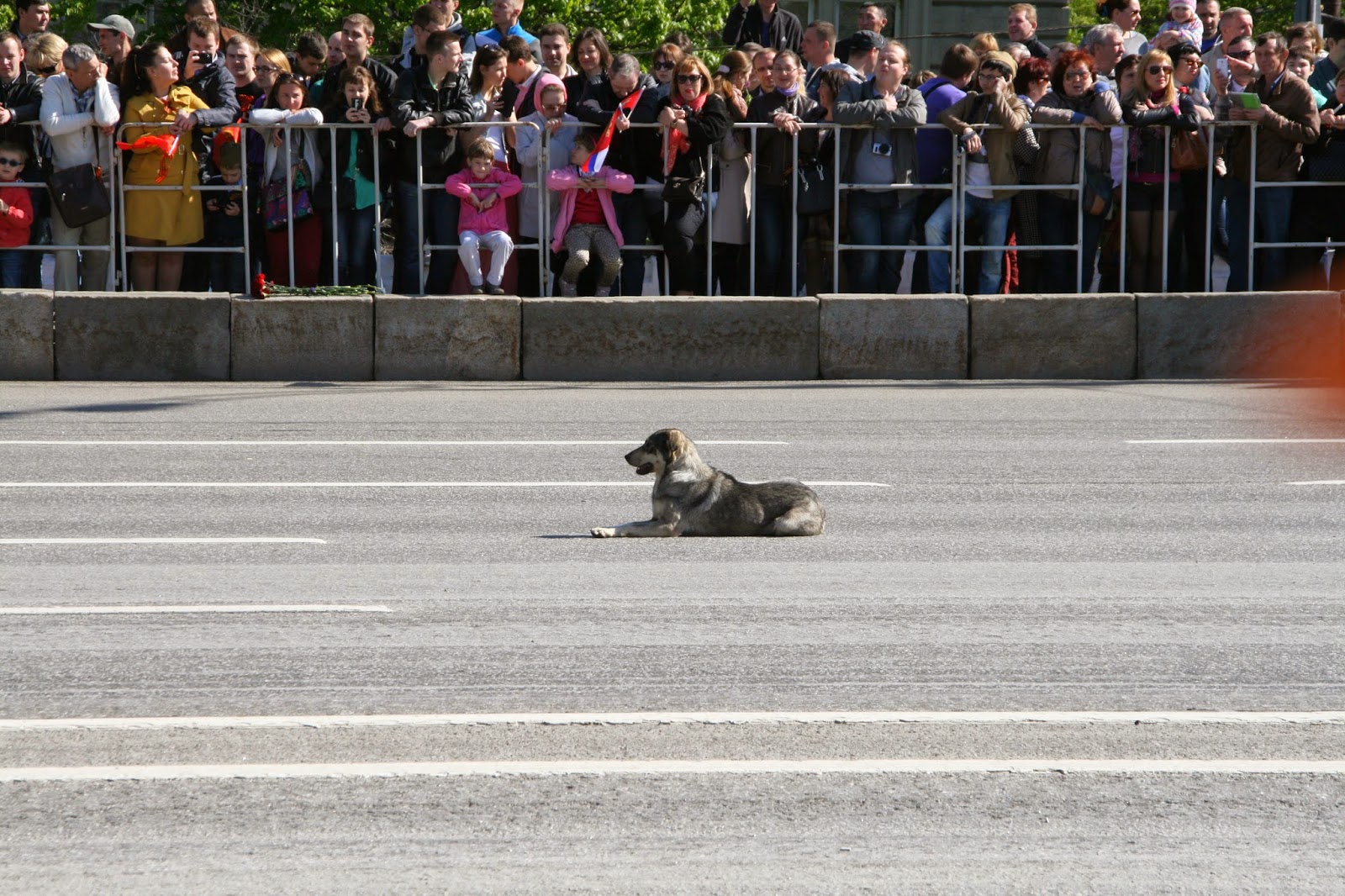 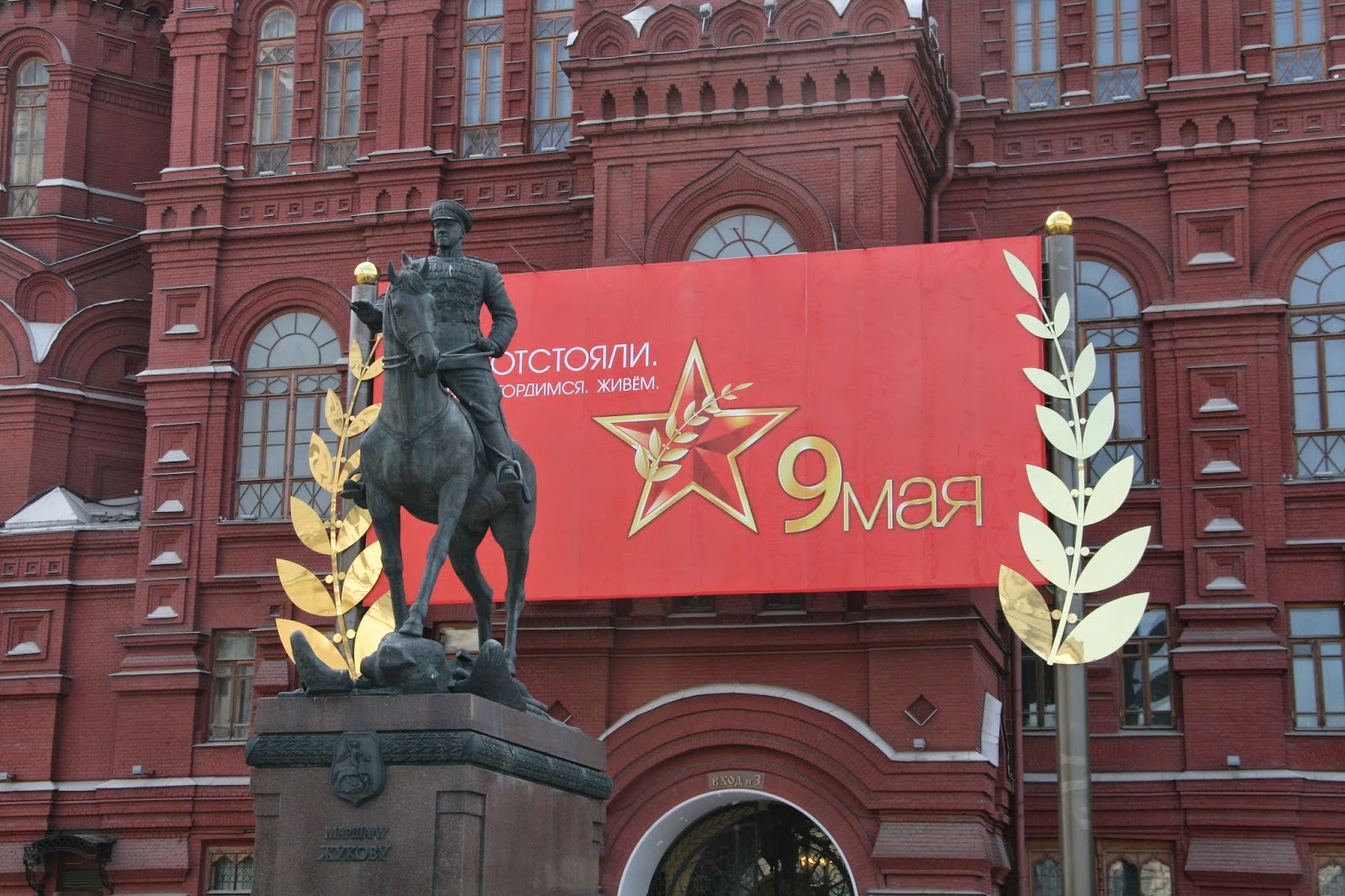 Proof that these apples haven't fallen far from the tree

Long-term readers of The Potty Diaries may have noticed that from time to time a post from my sis pops up in here.  (She's very funny - more than I am - in case you've missed those).  Well, also from time to time, my father sends me a missive - and the one below was too good to languish unused in my inbox.

Entirely co-incidentally, just as I am working my way through our cupboards here to prepare for our move back to the UK, my parents are having a proper clear-out of their kitchen cupboards.  This is my father's commentary on what they found lurking within...


Hi Clare,My, you should be really proud of us. Just cleared out the food cupboards, most notably the herbs, spices, oils, vinegars and other hard-to-get comestibles. We are left with roughly 10%, which are within 'best by', and a further 5% that smell-alright-and-therefore-probably-are-alright, mostly antiseptic-based food colourings. And the awards?For the Longest Past its 'Best By' date:  A large sachet of Japanese, oyster-based fish sauce, purchased in Aspen Colorado, marked ‘Use By January 2002’.The Most Tedious Piece of Food Recycling in 2015: A jar of Tate and Lyle Black Treacle c. 2008. Recognised for blocking up the kitchen waste pipe for 37 minutes until cleared by a stiff dose of Whiting's 'Big Biffa' waste clearer.The Recyclable Most Determined to Leave its Mark: 100gms of Sharwood's turmeric powder which, despite the efforts of the household, and Wells' team of First Responders, managed to despoil the boot of its owners' Seat Ibiza motor car, her spouse's foul-weather upper body protective, and the glass recycling bin in the Tesco car park.The Recyclable that Most Brutally Brought Tears of Nostalgia to the Eyes of the Recyclers: 50gms of Madagascan Vanilla Essence c. 2009; recognised for its incomparable contribution to the culinary excellence of the local area by infusing six years of festive panna cotta desserts for the poor and needy of the village.And the Lifetime Achievement Award goes to: 500 gms of Malaccun cloves, sourced before modern records (and ‘best by’ dates) began, but believed by experts from the V&A to have been distributed by Nurdin and Peacock’s Cash and Carry Warehouse, Wadden Way, Cheltenham in the late 20th century. Probably predates the Japanese rubbish mentioned earlier. Best guess? 1975 when the memsahib started baking flans for the company canteen.

Email ThisBlogThis!Share to TwitterShare to FacebookShare to Pinterest
Labels: Being an expat, moving on, parents, returning home

Living outside your country of origin for more than a short while is a useful exercise inasmuch as it allows you to re-evaluate exactly what it is about 'home' that matters.

A case in point; last Thursday, Boy #2's piano teacher - a Russian - asked me excitedly if I knew if it had been born yet.

I beg your pardon?

I genuinely had no clue what she was talking about.

We don't have cable, you see.  And whilst I follow the news from home, read the newspapers online, listen to the radio etc, it seems I filter a lot more than I realised.  I only click on items that I have any real interest in.  Like, politics.  Social commentary.  Lifestyle.  Entertainment.  Education.  World events.

Not, it seems, what is happening in the UK's royal family - who I had completely forgotten are expecting a new addition some time soon.

And the funny thing is, I have no beef with the Windsors.  I'm not in favour of the UK becoming a republic, and I think our monarchy works; it fulfils a parliamentary purpose, they (mostly) work hard, and in general are an attribute that I'm perfectly happy to support through the civil list.

But I don't actually care about their personal lives, so much.  I wish them well, of course.  I hope that everything goes smoothly for Kate and William with the birth of the new baby.  But it doesn't occupy my mind (or didn't, until I started to write this post) to the extent that non-British people I encounter seem to be occupied by this.  It never ceases to amaze me how fascinated some of them are by our Royal Family, to be honest.

So I wonder: there's the world media's representation of what's going on back home, and then there's Real Life.  I know that of course there are royalist die-hards camped out by the hospital where the new baby is due to be born, but is the Royal Baby something that is top of mind for those of you reading this from within the UK?

(And is it unrealistic of me to say that I really hope that it isn't?)