Lockdown Home-schooling - What Have We Learned?

(Before I start, apologies for the ENORMOUS text.  I'm not trying to shout - this post's settings are just screwed up...)
So.  Here we are in Week 14 of Home Learning.  (Well - Wk 12 if you deduct the two week holiday in the middle.  I don't.  Because it didn't really seem like a holiday, what with all the fretting and worrying etc).  What have we learned, parents?

Lockdown Teen Wrangling - or is it Lockdown Parent Management? 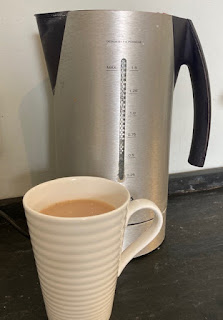 Lockdown is pretty crap, there's no doubt about it, but it's certainly giving me the chance to work on some of my parenting skills.  I've always been a 'You've started so you may as well finish' kind of mum, but it's finally dawned on me that perhaps this is an approach I need to keep unspoken since - who would have thought it? - sometimes kids can work that out for themselves.  For example:
Boy:  'I'm so bored.  I think I might go into town.'
'OK.'  (Don't ask him if he's finished his schoolwork.  Don't ask him if he's finished...) 'What are you working on?

Boy:  'Imperialism in India.'
He starts to collect his books and I busy myself with making a cup of tea.  I have been drinking a LOT of tea during Lockdown - such a useful prop...
After I judge enough time has passed for me not to seem too invested:  'Right.  Imperialism. Is it interesting?'
Boy.  'I don't know.  Maybe?'
Me.  'How much more do you have to do until you finish the bit you were working on?'  (Note use of past tense here: 'were working on'.  Very important.  Don't let him think you have any expectation he's going to finish it right now.  Softly, softly...)
Boy: ' Not sure.  I'll take a look.'  He flips open his book.  'Not much.  Probably ten minutes.'
Me: drinks tea.
Boy: 'I'll go when I've done it.'
I wait until his back is turned before I do a quiet fist pump.  But then, oh then...
'Don't do that, Mum.  It's so not cool. And you were doing so well, too.'
Busted.
For more Lockdown-related posts, click here
Posted by Potty Mummy at Thursday, June 11, 2020 2 comments:

Things that no longer happen in Lockdown

Things I have let slide since Lockdown started:

Wearing earrings.  In fact I'm not wearing much jewellery at all.  Why is that?  It's not as if I'm usually blinged up to the max, but right now most days even putting on my engagement ring seems a bit over the top.  Unless I'm off to the supermarket, of course - well, one has to keep up appearances. Note to self, however; it's no big deal if you don't wear rings from one week to the next, you just slide them on when you want.  Earrings, though.  Ouch.  OUCH.

Wearing make-up.  There have been a few evenings recently when I've begun to take off my mascara only to realise that I never put it on in the first place. Not quite there with the keeping up appearances, then.

Doing laundry every day.  I have no idea how this one's working, but somehow there is less laundry to be done.  I don't THINK my sons are re-wearing dirty-clothes - with the exception of the shorts I mentioned in my last post - but somehow there just don't seem to be as much to wash.  Maybe I've gone noseblind?

Congratulating myself on keeping a lid on the amount I spend on supermarket shopping.  As in, I don't congratulate myself any more.  Because it's gone through the roof.  With a husband home full time (he usually travels 4-5 days a week) at home and two teenage boys eating lunch and snacks here rather than in school will do that.  Every time I open the kitchen bin there's yet another empty digestive biscuit wrapper in there.  (And yes, they eat fruit too.  Particularly the fruit that I've bought thinking I will eat that instead of the biscuits.  So when I reach for the fruit and there's none there, guess what's left?  You got it.  Biscuits.  Oh well. Elasticated waists rule).

Planning a trip abroad.  Oh, alright - I AM planning.  Just not expecting to actually be allowed to go.

Clothes shopping for teens in Lockdown 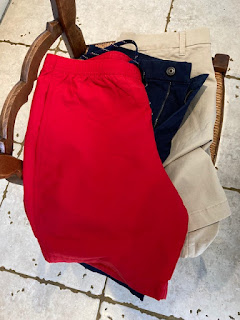 Boy #1 has grown - they do that, I'm told.  This is a problem; he's grown so much that none of last year's shorts fit.  Well, I say 'none'; what I actually mean is that only one pair fits - and they are of the quick-dry sports-related variety.  He loves them, obviously.  I detest them, but have been putting up with them because there's no alternative until the two pairs of replacements ordered online reach us.
The new ones arrive, and he tries them on.
Boy #1: 'Oh.'
Me:  'Quite.'
We watch them slide off his hips and onto the floor.
Me:  'So when you said you wanted that size, what were you basing it on?'
Boy #1: 'The trousers I have upstairs.  You know, the only trousers that are long enough.'
Me:  'The ones with the elastic adjuster in the waistline?'
He nods.
We send them back.
Three pairs of new shorts in a smaller size arrive 5 days later.  I have grown heartily sick of his wash & wear shorts in the meantime, in the main because he refuses to hand them over for the wash part.  Even though the weather has now changed and he could be wearing trousers instead, still the shorts make a daily appearance.
At my insistence Boy #1 tries the new shorts on soon after they arrive (if it was left to him they would stay in the bag for the next week).  Much to both our relief, they more or less fit (although he's still able to slide them down off his hips without undoing them, I note.  Obviously, for a teen-aged boy that's a bonus, but I make a mental note to suggest he wears a belt.  I am a mum, after all).
Me: 'Why don't you change into one of the new pairs now, and put your old ones in the wash?'
Boy #1:  'No.'
I'm taken aback.  'No?  Why on earth not?  They're disgusting!'
'Because I want to go for a run later, and if I put a new pair on now then two pairs of shorts will need to be washed, when I only really need to sort one. '
I'm speechless (and not because the incidences of him doing his own washing are less regular than I might like).  He has managed to come up with just about the ONLY reason I would let him get away with continuing to wear his quite frankly filthy shorts.
He knows it, too:  'Yeah, Mum.  Boom. Mic drop.'
We leave it there.  I know when I'm beaten.
For more Lockdown-related posts, click here
Posted by Potty Mummy at Friday, June 05, 2020 No comments:

Email ThisBlogThis!Share to TwitterShare to FacebookShare to Pinterest
Labels: being a parent to teens in lockdown, Boy #1, Lockdown, Lockdown Life, Lockdown parenting 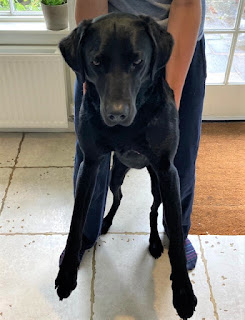 We do a stretch every school day at 10.00am, my sons and I.  We put aside whatever we're working on, get up from the kitchen table, and spend five minutes jumping around.  The dog tries to join in, we all bumble around in an effort to escape him (shorts weather offers no protection from his too-sharp claws), and we finish by properly Shaking It Out.  It lifts our spirits, wakes us up. It helps.  Then we make ourselves a cup of tea, sit down, and get back to whatever we were working on before.

When I started The 10.00am Stretch (yes, more capitals.  Get over it) back in the dark days of the third week of March, we were new to homeschooling.  We were also new, like everyone else, to Lockdown, and the whole complex combination of awfulness, relief, dread and - dare I say it - spasmodic sense of peacefulness that comprise it.  We - or I - hadn't yet realised how much it was going to mess with our heads.  The constant low-level fear of what might happen next seemed likely to be a temporary condition.

Well, it's now Lockdown - or a version of it - Week 11.  I wish I could say that the cocktail of feelings I described above has changed significantly but it hasn't, not really.  Of course, boredom has been thrown into the mix, along with frustration and despair at how badly the response to Covid19 has been managed in the UK, and a guarded sense of acceptance that other than by wearing a mask whilst shopping, I can make very little difference to that.  And obviously there's yet more fear.  Not for me personally, but for my children; what will this mean for them, long term?  For my parents; will they have to stay in isolation forever?  For the world at large; for those still unable to venture out due to health conditions and who consequently can't support themselves and their families, and finally yes, I'm going to say it, the horror of being a distant witness to the unrest - and the causes of it - in the US and elsewhere.

But, we have to keep on keeping on.  Time and tide wait for no man and all that, so we need to push through this the best we can and hope it all comes out alright in the end.

For me and my boys, keeping on means jumping around the kitchen for The 10.00am Stretch, even when we (or, increasingly, I) don't particularly feel like it.  Because, even if the dog's claws are sharp, and my shoulder hurts, and we're feeling a bit meh, we're doing it together and it makes us feel better.

Husband and I are on our way to a socially-distanced drink with good friends when he glances down and tuts.

'My shorts are a bit mucky.  I need to get them washed.'

Husband realises his mistake and tries to backtrack.  'I only meant-'

'Get them washed?  You make it sound as if you're planning to send them out to the laundry.'

I'm laughing and so is he. 'That's very grand.  Are we people who send our washing out now?  To a laundry?  You do know that the laundry is standing next to you.  I'm the laundry.'

When we reach our friends, I am proud to say that I manage to keep the above conversation to myself for all of fifteen minutes.