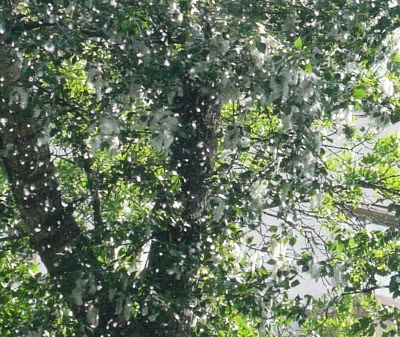 
Looks like snow, doesn't it? Don't be fooled; it's +22degCelsius here. No, the white spots on that picture are the result of it's being пух season in Moscow. This transposes into the Latin alphabet roughly as pukh (the 'kh' pronounced as the 'ch' in 'loch'), and refers to the vast quantities of down that float through the air at this time of year. I spent a frustrating half hour this morning trying to photograph it, but the photo above was the best I could do, so instead I'll have to use words to describe this seeming summer snow that arrives like a blizzard in the city every May and June.

It's the fluff that female poplar trees give out when they're feeling frisky (never knew trees had 'needs', did you?), and it's a real problem here. What normally happens - what should happen - is that the female poplar tree, once it works out through some mysterious tree tomtom that the seeds it's released have been fertisilised will stop producing them, so in most places the pukh season is - whilst quite pretty - mercifully brief.

Except, in Moscow. Enter Stalin.

Having built his mega-city of Moscow, it appears that he became depressed by the preponderance of concrete and the lack of green, so he ordered a few - if you can call 400,000 a 'few' - poplar trees to break things up, lift the spirits and ease the soul a little. There was just one problem which no-one had the nerve to point out. No-one told him that trees come in male and female, or that the consequence of ordering only the female of the species was that they become increasingly frustrated and rather than stopping production in a few days, as would happen normally, put out vast quantities of pukh for a much longer period of time.

I'm incredibly lucky not to be an allergy sufferer (unlike many others who are currently beating a trail to their doctors and hospitals), because there literally is no escape from this stuff. It gets everywhere, creeping in through open doors and windows, drifting into corners, piling up in drifts against the pavements, and even - during dry weather - causing a fire hazard when a spark or lit cigarette butt (of which there are many in this country of devoted smokers) touch it, as it's highly flammable.

Click here for the full story if you're interested. Personally I just want this itchy annoying stuff to go away, especially since I lost my prized sunglasses today - which I was wearing to protect my contact lenses from constant attack by it. Well, actually as a result of my own forgetfulness and leaving the glasses on a restaurant table, but I wouldn't have needed to wear them in the first place if there had been no pukh in evidence, so in my mind, it's those frustrated poplar trees fault. They owe me a new pair of Maui Jims.

I mean, frustrated poplar trees? What next?