On the 4th Day of Christmas, this expat blogger is looking forward to...

... meeting up with old friends. 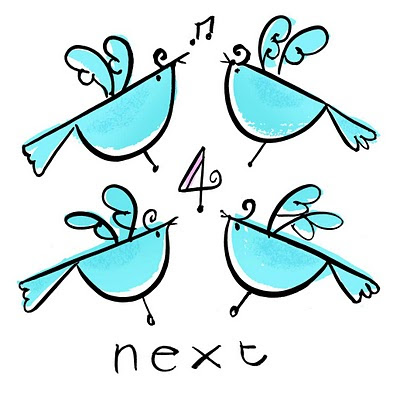 Post 4 from the Next Christmas campaign (click here to go to the post where I explain what that is), and my wish today is for some unhurried time with my girlfriends over the holidays. This has probably been prompted by the weekend I just spent back in the UK without my family at a christening, when I suddenly realised that my oldest girl friends, a gang of 5 who have been close since university, and who have been meeting regularly for the last twenty-mumble years, are shortly to be scattered again. Obviously, this is partly my fault (although Moscow is a suburb of London, surely?), but over the last 4 days two of them announced they too are leaving London, one for the north of England and the other for the far east. (Some people just have to go one better, don't they?).
I know it was foolish to think so, but I kind of imagined when I moved over here that nothing would really change back home, and that when we do return I would just be able to fit seamlessly back in to my old life.
Silly me. My life has moved on, why shouldn't everyone else's?
Today's Top Pick from the Next Site
I'm going to pretend that money is no object here (it is, obviously, since I'm writing this post), and think about what I would buy for these 4 long-standing girlfriends if I had a few hundred pounds to spare. I think it would be this - or something like it. Plus one for myself, obviously. Well, you can't expect others to wear what you wouldn't yourself, surely?
Plus, PLUS, click here to enter Next's fabulous Christmas Giveaway. (Today's object of desire is an Ipod Touch and accessories worth over £300...)
Posted by Potty Mummy at Tuesday, December 07, 2010

Email ThisBlogThis!Share to TwitterShare to FacebookShare to Pinterest
Labels: 12 Days of Christmas, girlfriends, moving on, Next