On the 2nd Day of Christmas, this expat is looking forward to: 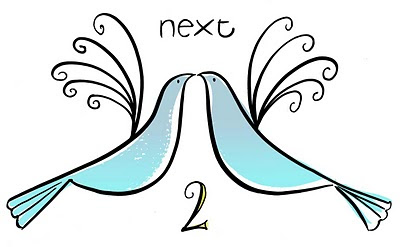 ...Proper mince pies.
For those of you not aware of what I'm up to here, Next have very kindly sent me twelve beautiful illustrations for each verse of the carol 'The Twelve Days of Christmas', and to use them wisely I've decided to write about what I, as an expat due to be back in the UK for the holidays, am most looking forward to when I get there.
Which brings me to proper mince pies. I don't care if they're home-made or shop-bought (although obviously - OBVIOUSLY - my mother's are the most delicious in the world), just as long as they are deep-filled, full of delicious spicy mincemeat and, in an ideal world, topped with icing sugar. AND cream. Or brandy butter. If I must. (Well, it would be rude not to, don't you think?)
In the spirit of intrepid expat-ness, I tried to make them here, but unfortunately they came in under the bracket 'sorry excuse for a proper mince pie'. This was last weekend; I had made them to take to my first ever Thanksgiving Lunch.
'Bring something festive from your country of origin' the invitation said. I didn't think a plate of tinsel would do it, so found some mincemeat (purloined from a generous neighbour) and for the first time in my life, made sweet pastry. They tasted - all right. If a little dry.
But I shouldn't have bothered. After the fact, I remembered past experience of having to educate friends of different nationalities that the 'mincemeat' in mince pies doesn't actually contain any meat. (Or at least, it hasn't done for a couple of hundred years). We arrived at the party, along with 12 mince pies that could have done with a slightly less dry pastry. And back home we came again, with 11 of them. Not a single person there - other than me, who took pity on the plate of pies sitting forlornly on the table surrounded by empty dishes - could bring themselves to try something that was supposed to be sweet with the name 'mince' in the title.
But yet, everyone else there was happy to eat pumpkin, in a pie. And I stand by my mince pies in light of that, when I compare them to the pumpkin pie which was served. I tried some. It was OK. Not great. Not earth shaking. Just - all right. Actually, I'm told it was pretty good pumpkin pie as pumpkin pies go, it's just that, well. Pumpkin? As a pudding?
On the plus side, I was able to say hand on heart to my hostess that it was the best pumpkin pie I had ever tasted.
What I left out was that it was also the only pumpkin pie I had ever tasted...
Today's Top Pick from the Next Site
This was a toughie - but only because my chosen area of interest for today, boots suitable for the Moscow winter, was mainly sold out. Living in the UK, as probably most readers of this blog do, I imagine that most people don't need to factor temps of -25degC and below along with the ability to deal with the chemicals etc that get thrown on the roads and pavements here into your choice of shoe; in which case, click here and enjoy!
Posted by Potty Mummy at Friday, December 03, 2010

Email ThisBlogThis!Share to TwitterShare to FacebookShare to Pinterest
Labels: 12 Days of Christmas, going home for the holidays, Next, Russian winter, winter clothing