I seem to spend my life running against the clock. No matter how much time I allow, no matter how early I set out, I always arrive panting, 'glowing', and just about on time. I have the best intentions, always, but somehow they just seem to melt away when distracted by that oh-so-important phone call I need to make, text I need to send, or Boy I need to tear away from his beloved Thomas railway.

So, as usual, I'm late with this one: the gorgeous Jo Beaufoix (like Kate Moss - but not) is hosting the Carnival this time round. Take a look, they're all great, though I have to say that I most needed (and didn't have) a tissue whilst reading 21st Century Mummy, for the tears, and Mothership, for the snorts...

Also, I've been tagged. Twice! And both times for the same task, first by Iota, and secondly by Mud in the City. Here are the rules for this one:

Go to the 4th folder in your computer where you store your pictures
Pick the 4th picture in that folder
Explain the picture
Tag 4 people to do the same.

There's just one thing with this; you may have noticed that I never post pictures of my children. (Well, I did once, but took it off in a fit of guilt after a couple of days.) Why?

Well, firstly, whilst I know that most likely there are not internet pedophiles scouring my posts for photos of my boys, I can't take the risk. Especially with a blog name like Potty Mummy attracting who-knows-what crazies. (Hey? Hey? I've got a point, right?).

Secondly, I know that whilst I blog about my children and that in years to come they probably won't be overjoyed at some of the stuff I've written about their tantrums and loo habits, I like to kid myself that I am maintaining some kind of privacy for them by not posting their names or faces. (Like that's going to cut the mustard during their future teenage angst and naval gazing. I'm toast).

Thirdly, well, thirdly, I promised my husband I wouldn't. And if I'm honest, that one's the deal breaker. That's the one that has more than once stopped me from hitting the 'upload' button for a particularly cute picture of my two little angels, because I am just so proud of them, so amazed by who they are and how incredible they are (in just the same way that I suspect most mothers are about their children - though of course mine are much more amazing and incredible, for the record), and I would love to share their photo's with just about anyone who's interested.

But I can't - for those reasons.

However, here's a half-way house. 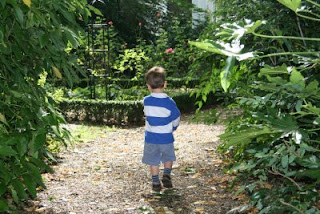 I'm afraid that I'm flouting all the rules here: it's not the 4th photo from the 4th folder in the 7th house on the 19th road (or whatever), but it is a photo of one of my boys. It was taken in the communal garden behind our building, on an unexpectedly lovely October day. We don't make as much use of this garden as we should, mainly because we don't have direct access and have to go out on to the main road and round a corner to get in, but on this day I took Boy #2 up there along with the camera. He's heading for the play area where no doubt he was about to climb up into the 'den' and offer me tea, hot chocolate and cake - because that is what he always does - before deciding that it was time for me to chase him round the lawn. My job then is to pretend to be a monster looking for dinner - him - to eat with too much tomato ketchup...

I love this photo because he looks so deep in thought, the sun is actually shining (not a common event during 2008), and he is wearing the Bath rugby shirt that we purchased for his brother before Boy #2 was even born. I remember buying it in the Bath Rugby shop in - you guessed it - Bath, during an illicit weekend there with Husband whilst my parents were looking after Boy #1. Well, I say 'illicit'. As illicit as it's possible to get when you're 7 1/2 months pregnant, that is...

It will be a sad day - fast approaching - when Boy #2 grows out of that shirt. I may have to break my habit of passing everything on with this one, and instead of donating it to my sister-in-law or Oxfam, put it in a box for whichever of my two wants it when they get older and, please god, have children of their own.