Well, it seemed like such a good idea at the time...

1. Stuffing fistfuls of raisins down your neck to get past the 4.00 pm sugar low.

Note: this is not advisable unless you actually enjoy sitting moaning softly, hunched over at the dinner table, whilst trying to convince your children to eat their yummy and delicious dinner. "No, dear Boys, I am not writhing in pain like this because I have eaten said dinner. I am in pain because I thought that for once I wouldn't lurk in the kitchen inhaling chocolate whilst your backs are turned in adoration of C-Beebies, but decided that instead I would have a healthy snack of dried fruit." OK, so perhaps eating the whole pack wasn't the best plan...

2. Giving the Boys baked beans and scrambled eggs on toast for their tea this evening.

What was I thinking? In the words of Rene in 'Allo Allo!'; "Do not light ze candle until I 'ave opened ze window!"

3. Allowing Husband to leave for Russia on Sunday morning without first checking that on the new computer he set up on Saturday, he had actually remembered to install Word. Powerpoint. Excel. Adobe...

Oh well. "I would have done our accounts for January darling, but I just couldn't find the right programme..." (Maybe not such a bad decision, that one).


4. Not sending in a photograph of myself to the local mag that is running an article from me in it's next issue.


Well, I thought the overstuffed bag photo below, which I sent them instead of a shot of yours truly for the February issue, would do the job for March as well. Instead, they have inserted a hand-drawn illustration of a skinny brunette wearing a Supermum outfit doing the lotus position. (Trust me on this; it is not as good as it sounds. And no, you don't get to view it...). If anyone who knows me sees it they may well think I have dropped 5 stone and taken up yoga and doodling. And I have only myself to blame for not supplying an alternative. 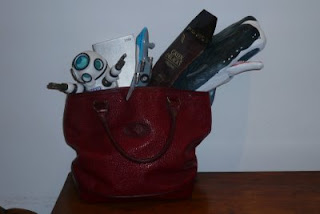 The hunt for a photograph of myself that I actually like and which is less than 10 years old is on before the April issue goes to press.


Anyone got any airbrushing programmes?
Posted by Potty Mummy at Tuesday, February 10, 2009