Stop Press: Proof that there is a god...

... or alternatively, that I am a goddess.
(It all depends on your point of view).
So there we were, the Boys and I, making our way home from a friend's house and up against it to get there in time before Boy 1's slimy (I'm sorry, but there is no other word for him) guitar teacher arrived and started charging us for time from the second he clocked in.
Picture the scene; it was a relatively mild late afternoon of only -4 degreesC. It had been snowing, but only a little, so whilst there was a light covering on the road, it wasn't enough to allow the sled to run freely with 2 tired boys on it. I had to choose. Knowing which was the more troublesome of my two sons, I put Boy #2 on it for the first 200 metres, and was planning on putting Boy #1 on it for the second.
Obviously, it was going to be disastrous whichever way I tried to play it. Obviously. And so it proved when I forcibly ejected Boy #2 from the seat of power as we passed the compound Christmas tree (the pre-agreed tipping point), and tried to replace him with an up-until-that-moment-whingeing-terribly Boy #1.
Boy #2 retaliated against his fall from grace by shouting even louder than his older brother had previously been doing ('anything you can do Bro, I can do better...'), and bodily hurling himself across the back of the sled (one of those picturesque wooden number on raised runners that actually works quite well), and holding for dear life as I tried to tug both him and his older brother along. Since their combined weight was around 50kg, the sled was having none of it and stuck fast on the meagre snow covering as I slipped and slid around, cursing somewhat, on the icy road.
Oh boy. It wasn't pretty.
But then, a brainwave.
"I tell you what, Boy #2. You come up front with me, stand inside the rope of the sled, and you can be Rudolph and help me pull Boy #1 along..."
I held my breath.
"Oh yes! Yes! YES MAMA! Quick, quick, let me come in!" And he shot around to the front of the sled in 2 seconds flat and ducked under what were now to be known as 'the reins'. But that's not all. We walked 10 meters before animal crazy Boy #1, reclining in splendour on the seat of power, spoke up.
"Can I be the reindeer, Boy #2? You be Father Christmas, and I'll be the reindeer."
"OK."
And with much dashing, prancing, whinnying (because reindeers do that, you know), and 'Faster Donner! Faster Blixen!' and pretend whip cracks from the sled, we were home faster than you could say 'And when we get home Boys, let's make glittery paper snowflakes to hang in the window.'
Who would have thought the solution could be so simple? So I rest my case; either there IS a god (and he put that thought into my head), or I am a goddess.
And in honour of that second possibility, here is the last of the illustrations from Next's 12 Days of Christmas campaign (yes yes, I know it's the 13th today), and my final pick from their catalogue. Cue - appropriately - drumroll... 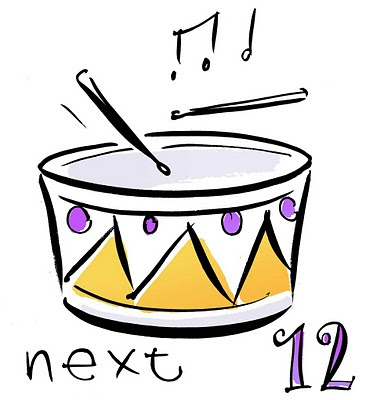 After this afternoon's brush with divinity, I decided to look for something suitably goddess-like - or at least, that might make me feel that way.
I think these might do it. On the other hand, I might instead end up with a muffin top, and get all hot and sweaty whilst I stick to the seats of a leather sofa, but a girl can dream, can't she?
This was a sponsored post - and if you click here you can still enter Next's Christmas Giveway where £1000's worth of prizes are being given away, wrapped, and delivered to you in time for December 25th...
Posted by Potty Mummy at Monday, December 13, 2010

Email ThisBlogThis!Share to TwitterShare to FacebookShare to Pinterest
Labels: 12 Days of Christmas, Boys #1 and #2, living in Russia, Next, playing god